Summer is over, at least in the northern hemisphere, so time for some Banished modding. I could not do very much, but I want to continue the blog and to show what’s finished or started. The topic of the month seems to be storage and trading, which was not really planned. But, one by one..

At the beginning of October, I got the Weaver’s Hut up and running. Of course, it needed flax as a crop as well as a material and I decided to make my own models. I had to google first how such a flax field actually looks and then to build something that fits the character of the plant but also runs fast enough in game because crops can easily hit the frame rate. Here are some impressions of real flax fields:

And here how it looks in Banished right now. My little flax farm. :) 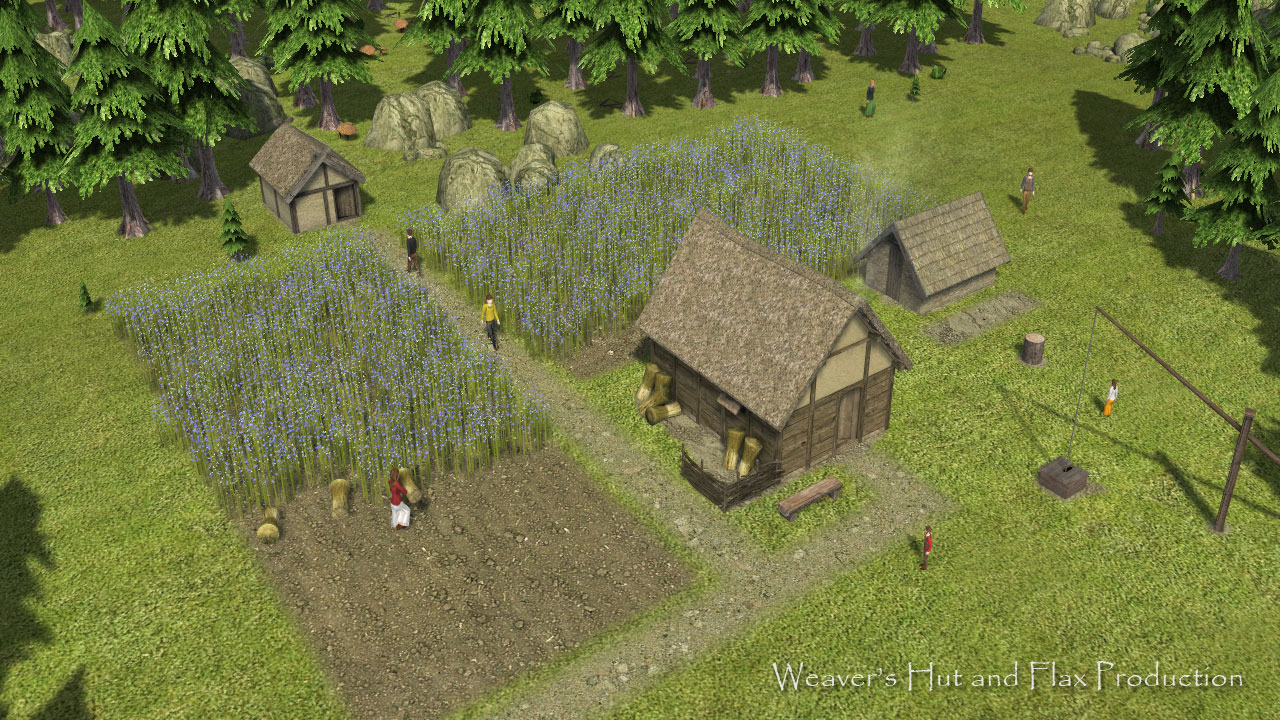 Then I got a nice suggestion from Finland for new storage buildings and as a result, this loft storehouse was built. It is a traditional type of storehouse for clothes and things like that and with bedrooms in the attic. In summer, people spent their nights here, certainly to escape from the crowded main house, which was heated in winter but also used as a workplace and kitchen. In order to implement this feature in Banished, it will be a storage location for clothing, textiles and utensils including a small happiness radius. With the passage, it will be also interesting as a gatehouse for farmsteads. 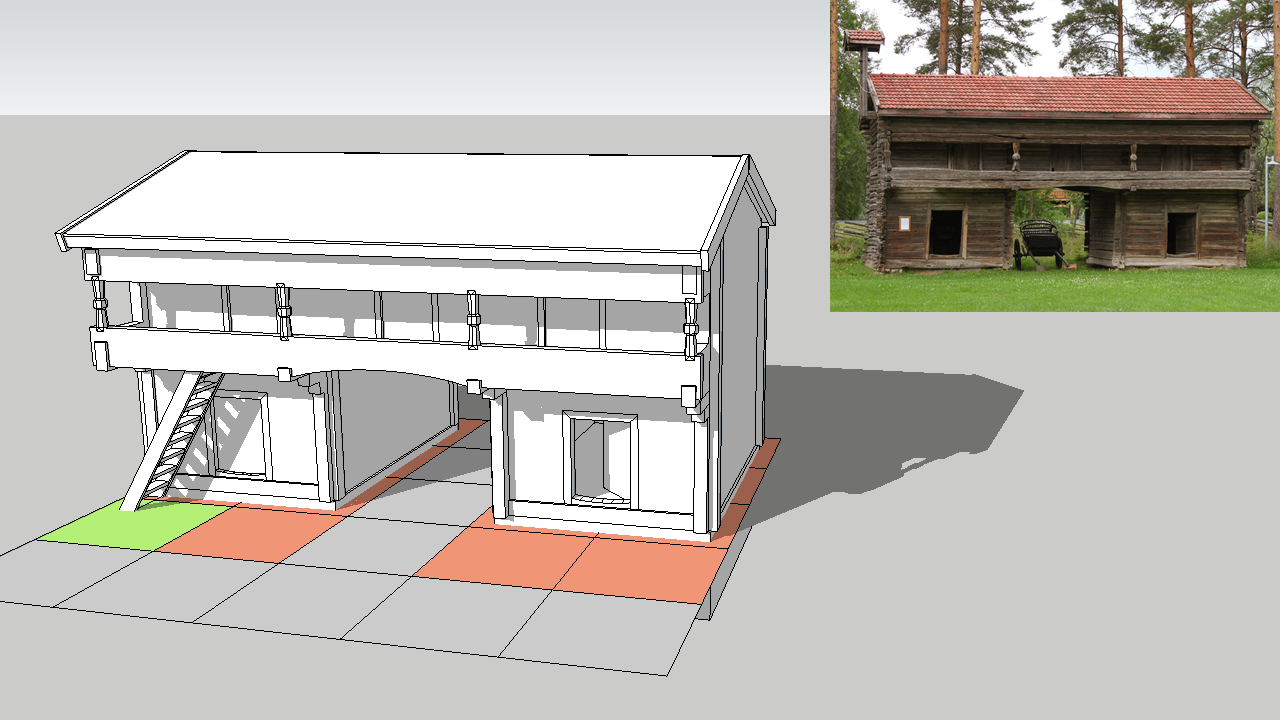 About the suggestions and some image researching, I came up with the idea of a big but old storehouse. There were similar buildings in different designs and sizes with such floor constructions as a typical feature, on the one hand to keep animals away but certainly also for efficient storage. In Banished, this is a useful addition, as the brick barn is only available in late game and the various sheds or pit houses are small. This is the first draft, with open walkways left and right, which additionally supports the space-saving design. More variants can follow later. 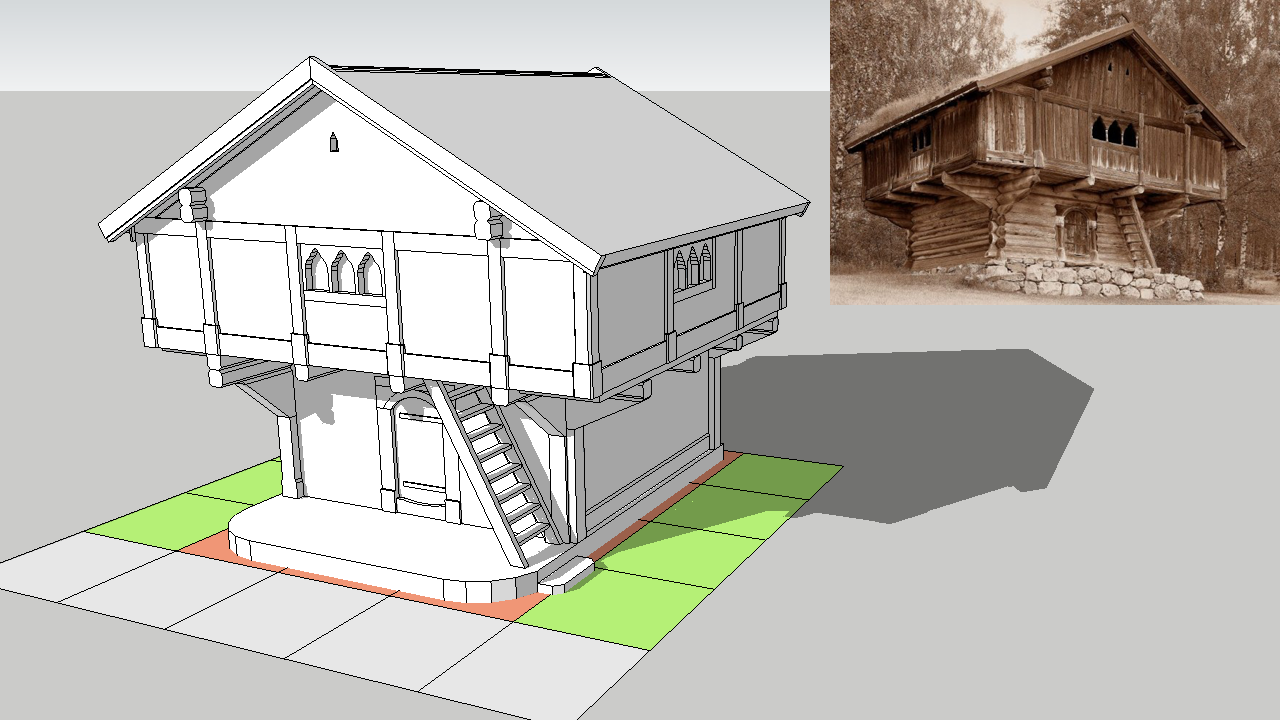 Granary to support the mill

While working on these storehouses, the old idea of a granary to effectively store grain and to support mills came up again. Both the watermill and the new windmill have special requirements for their location (stream or hill). That’s realistic, and also creates historical settlement structures and interesting challenges in game. But transporting grain to the mill can be a problem and it would be nice if you could somehow optimize it (without relocating the whole village). The little granary below allows it now. Up to 3 workers can be hired here to carry rye or wheat from the barns in the village. The miller can then make use of the near granary and also stores the finished flour right here, for short distances and continual mill operation. You can now optimize your own village with the Granary mod for download below the post. 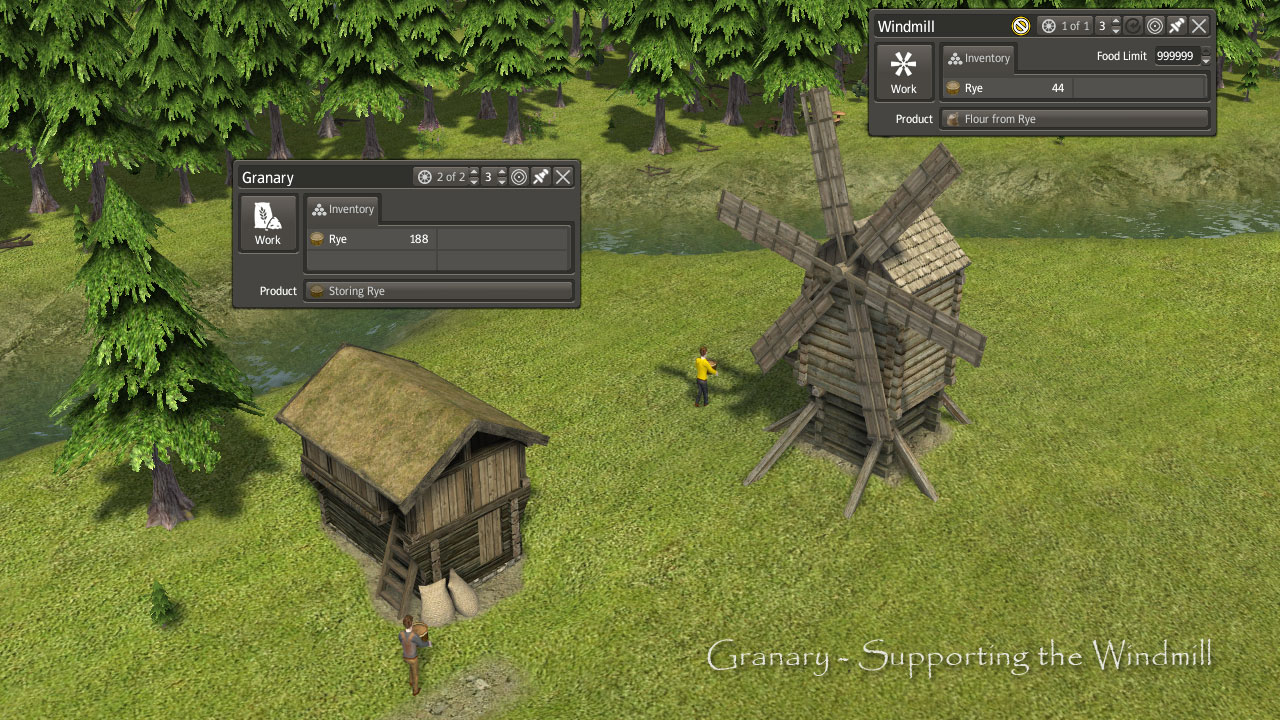 In the last few days, I’ve started replacing one of the last Vanilla models. I find the trading post one of the best models of the original game but it does not really fit in the North anymore. Actually, I’m thinking of a kind of modular trading port that you combine yourself but this idea also has some drawbacks and there were always suggestions from players who wanted an object with higher storage capacity simply because it is more comfortable with the game mechanics and also necessary for auto-purchasing. Some time ago I had saved this photo, but I don’t know anymore where it was exactly. It’s for sure one of the Viking open-air museums in Sweden or Denmark. 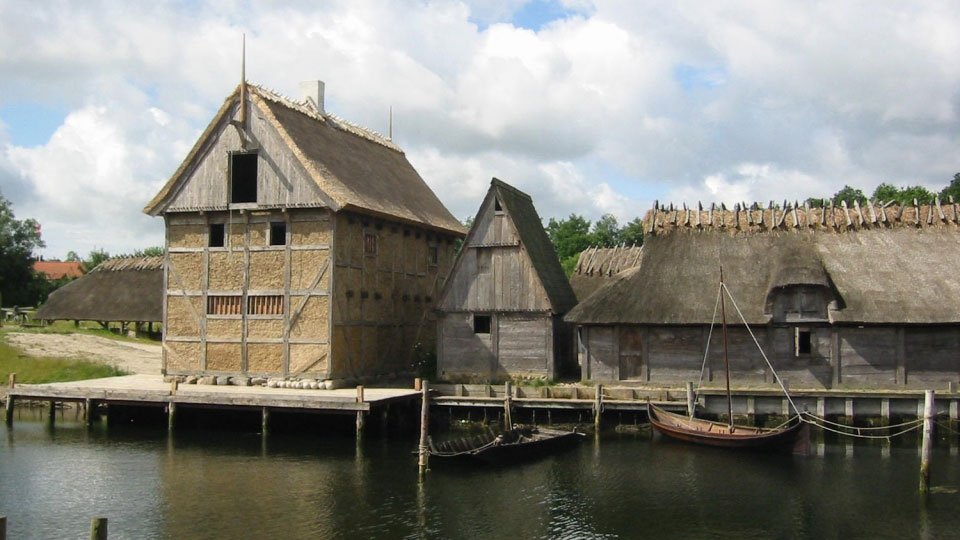 This picture is my template for the new trading post. The small house in the middle I took out to get exactly the original dimensions of 12 x 11 tiles (also to fit it in the menu scenery). I want to use it later for a special fur trading post. And that’s how it looks like in SketchUp for now: 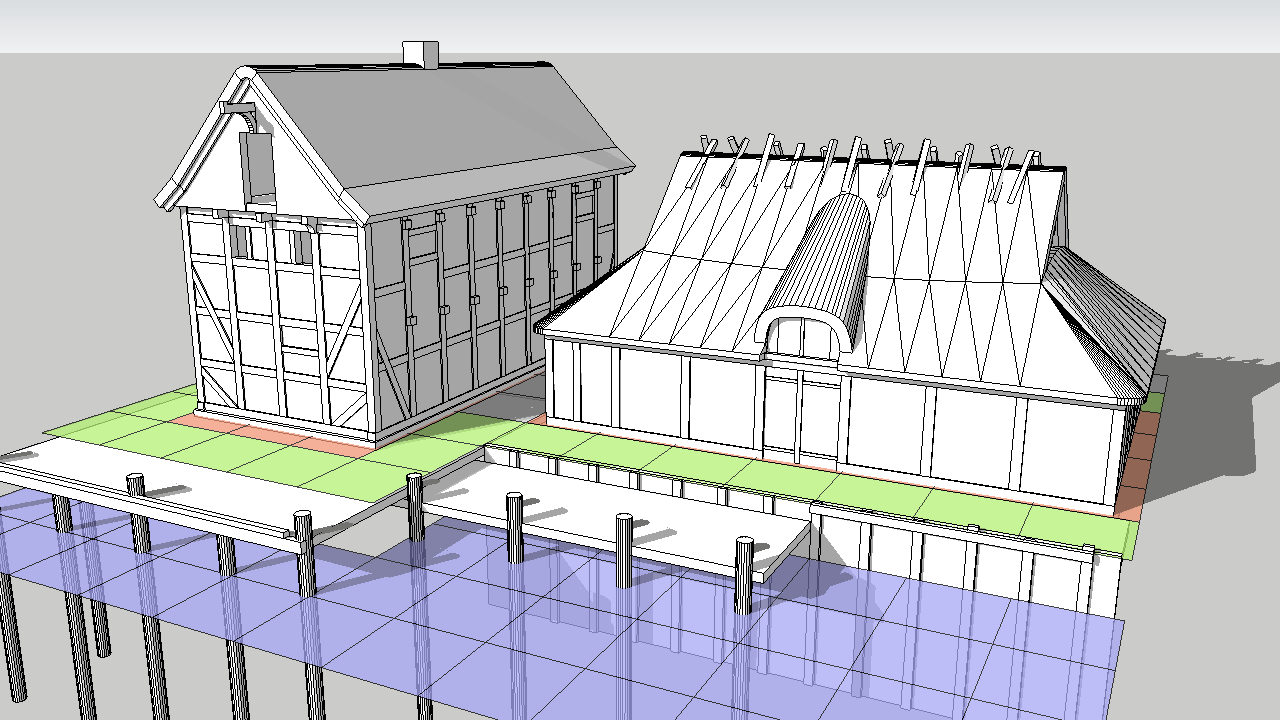 So far for this month. Have fun testing the Granary and as always, let me know your opinions and suggestions, here or over on WoB.

Nordic Granary (1.0 MB)
The new granary to store grain and to support your mills.

Can yo incorporate the Natural Diversity mod or equivalent? I like the play of North but I like the visuals of more animals and plants, flowers.

To incorporate is not possible because it was made by another modder. We talked about this mod and he made a light version which is fully compatible with the North and only replaces models of plants. Since my last update it works side by side with Nordic herbs. So you will not lose any natural diversity.^^ It’s one of my favorite add-ons in the North. You can find a link in compatibility list.

Yay! So happy to see these, and can’t wait to try more than the Granary!

Hello Could you please make something like this:
Supply Barn – either can hold anything and you set an amount of each item it should hold an amount of (nothing else allowed in). This way I can store fire wood and charcoal near bloomer. Vendors would also push goods to this building or storage space, to meet the minimum. If that can’t be done, maybe it’s like a mini marketplace with it’s own vendor and I can select which items and how much can go in it, and other marketplace/trade docks would not take from it.
Maybe it’s simpler if it’s dedicated and holds only one item, and I can select that item and the amount, preferably it’s vendor fetches, and other vendors won’t remove from it.

After thinking about it a bit more, as long as it’s small (but attractive) it could be a one item thing, that has a vendor that will fetch the good, and either I set the amount or they come in different capacities but 100 would be great to start with. The only trick would be not having the marketplace vendor pulling from it.
Be neat if it was a loft, but that’s a problem for buildings that require more than one good. So maybe s/m/l barns with a fetcher and prevents other vendors?

Such a supply barn where you can define the amount of certain items to be stored is not possible. Or it is but people could not gather these resources anymore. It would be technically a trading post without arriving merchants. CC has something like this and it needs a players action to free the stuff. So not really useful to support production buildings or to organize a working goods traffic.

Specialized markets or suppliers who provide charcoal and iron are doable. Will think about it. You ask especially to support blacksmiths? Also and in most cases it is the best strategy to place connected production buildings close to each other. Just as it would be in real, clay pits around a brickyard for example.

Using RK Editors Choice I find he has carts which do most of what I was looking for – they draw only a certain item such as firewood to a certain location (next to a production that uses it). It might work, I haven’t yet noticed whether the market will still pull from it.
However it’s not as great as I imagined because I find my people pick up a couple of iron for example and carry them around until they drop them off with food. So there are like 1 and 2 firewoods or iron spread around in storages. So I guess it’s either the blacksmith or the cart vendor whos going to walk around picking up 1 or 2. Maybe it get’s better when I’m producing more stuff, I envisioned the cart vendor picking up like 100 at a time to be efficient, instead of the 4-6 the blacksmith seems to pick up even from a full pile.

Yes, logistics is a tricky business in Banished. Those small and specialized carts are nice to optimize it and if you are looking for a stand-alone mod compatible with the North, you can try DS Wagon Vendors from compatibility list and also available in Steam Workshop. To be placed below the North because it gets adapted to work there.

Evetything looks awesome, but I love the SketchUp look of new trading post.Will you also do it as a standalone,so we can use it as alternative to vanilla trading post? Did you maybe consider to add a part for animals?
Oh yes, which kind of grain granary supports?
Anyway,great work. Regards zak4862

Yes, it can be also stand-alone then. Trading posts are very much connected to the resource management of a mod but it can be just a simple design replacement of the vanilla model. Livestock will stay in this kind of barn building to the right with an open gate at the back, from where they start their walk to the pasture.

The granary can actively store rye and wheat (what my mills process). Passively everything flagged as grain can be stored as well. This way the miller puts his flour there and the mates carry it away. This mechanic is a bit experimental and I would like to hear from players how it works or when it makes problems.

We use cookies to ensure that we give you the best experience on our website. If you continue to use this site we will assume that you are happy with it.Ok