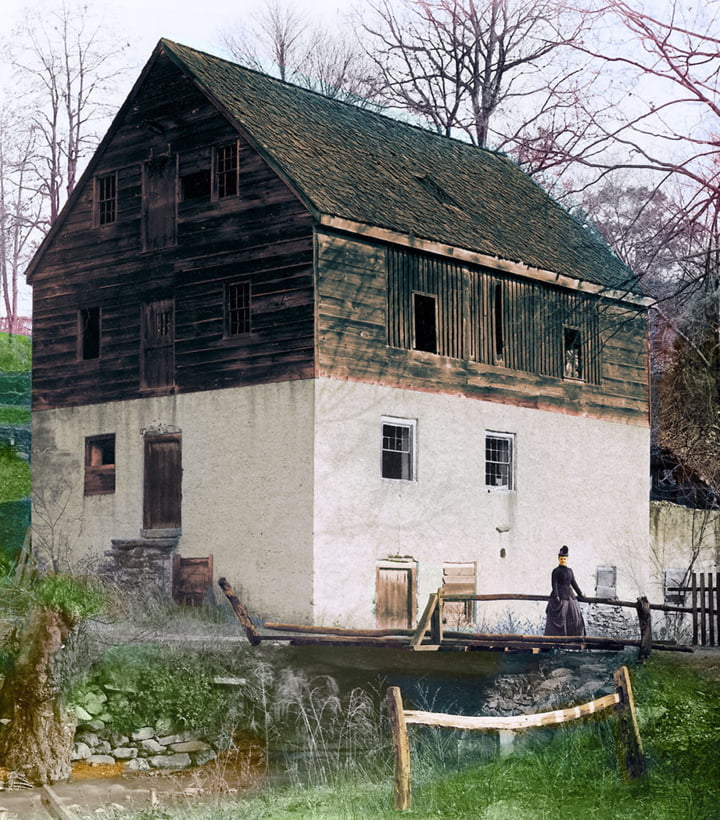 In year 1678, a young German guy named Wilhelm Rettlinghausen the papermaker moved to the Netherlands, to marry a girl from Amsterdam and to become an even better papermaker. Ten years later they entered a ship sailing to that promising new world beyond the sea. He claimed some land in Pennsylvania at the Monoshone Creek and did what an ambicious papermaker is his fate – he built a paper making mill. The first one in New England. The wooden construction did not last long and was washed away by the wild creek. But a second mill was built right away, bigger and stronger with its first floor of stone to withstand every flood.

1890 the paper mill was pictured before taken down. It shows the mill already out of service and without the big wheel that must have been at the waterside. 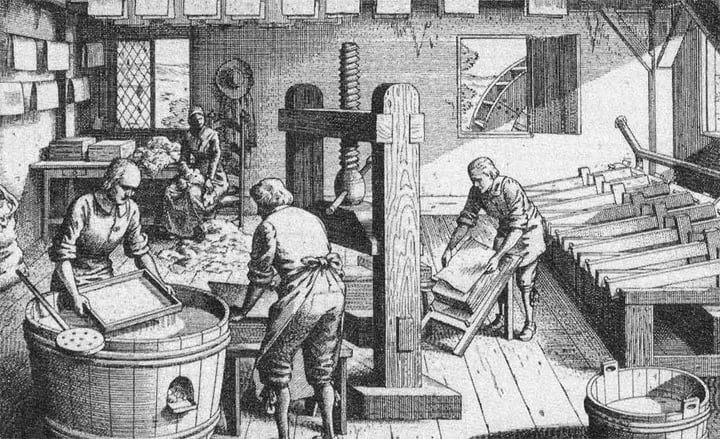 We would consider paper to be made of wood but at this time it was produced in a laborious process from linen rags. Paper from Rittenhouse mill was the only produced in New England for decades. It was used for letters, newspapers and bibles in Philadelphia and New York.

About 300 years later, another German guy is going to build again the first paper mill of New England. Even also inspired by one from the Netherlands. Thanks to Artfactial for the idea and a lot of research. :) 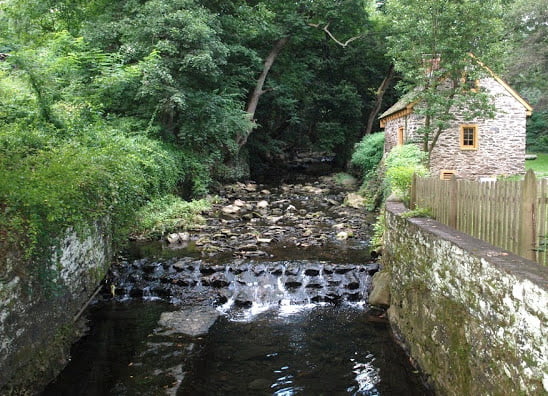 Making a water mill for Banished is not that simple since it has to be placed at a stream and to look nice in all possible positions. So the first step is to make a concept on game tiles where to decide about size, placing, walkways etc.. The second Rittenhouse mill is a rather big construction which can be tricky. I want to rebuild this mill as true to the original as possible but it has to be adapted to the game. Another issue is missing image material. We could not find more than this picture from 1890 and photos of the location today. The latter at least helped to reconstruct the water side.

And so it can basically work, with a weir that directs the stream into a channel to drive the mill. If you look at the first picture closely, it can be seen at the right edge of the wall where the axis probably went into the building. The main entrance for workers will be at the backside together with a small extension that can be seen in first picture as well. In front I want to include this simple wooden bridge. It will make the model even more like the original Rittenhouse mill. 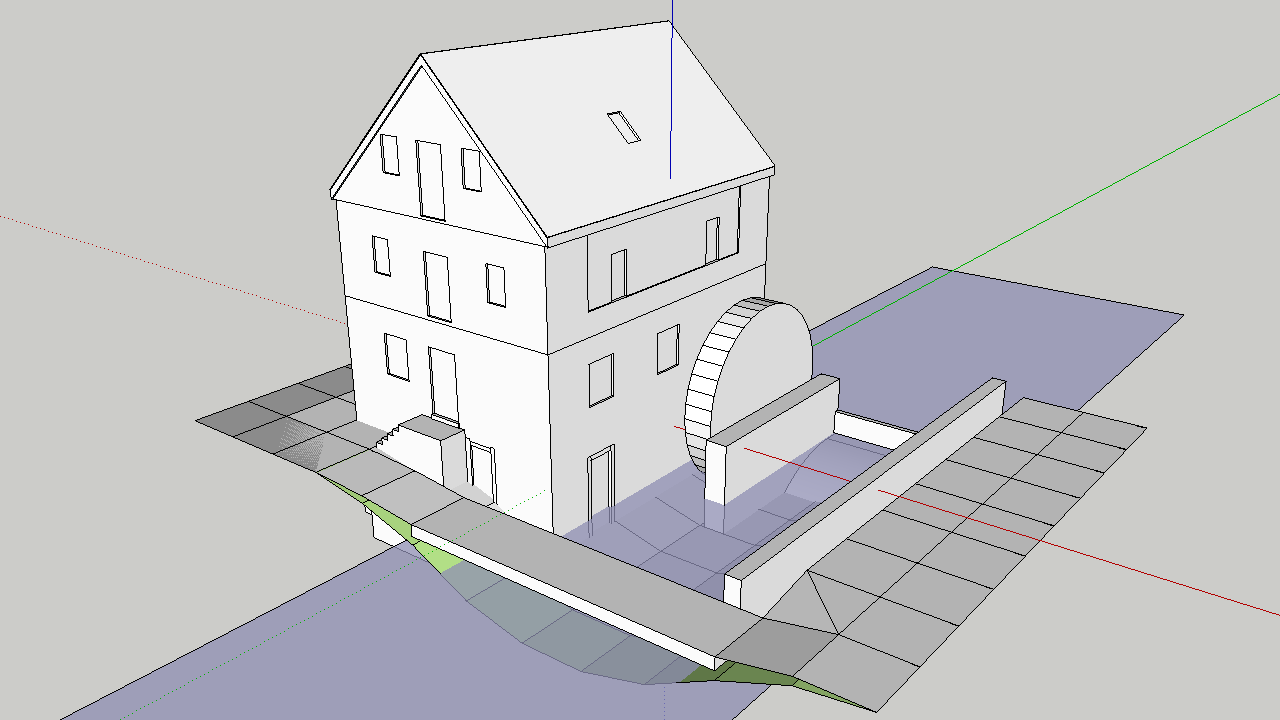 Pictures are from rittenhousetown.org. Please visit their site if you are interested in more info about this historical location and the old way of paper making.

Next step will be drawing the model in SketchUp with all details and to prepare it for Banished.

The Rittenhouse mill is now finished in SketchUp with a bit more detail than expected. I decided to draw the second floor completely because it seems a special feature of this mill. While in first floor the raw material was processed and paper sheets prepared, the upper floor was workplace for pressing and drying them. I asume this open wooden construction to be designed for these production steps with constant air draft. The last picture shows weir and water wheel as it could have been at the original mill. 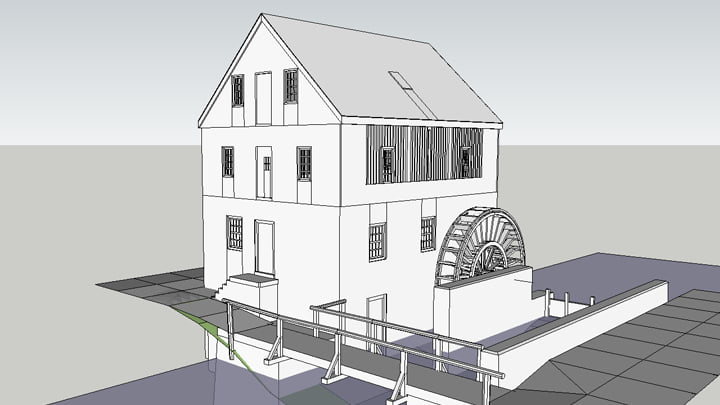 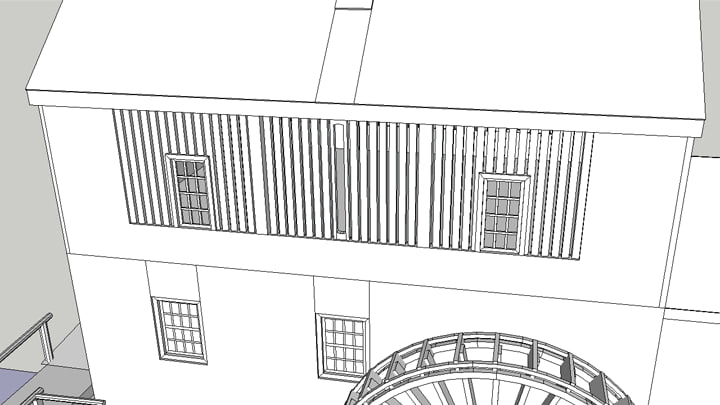 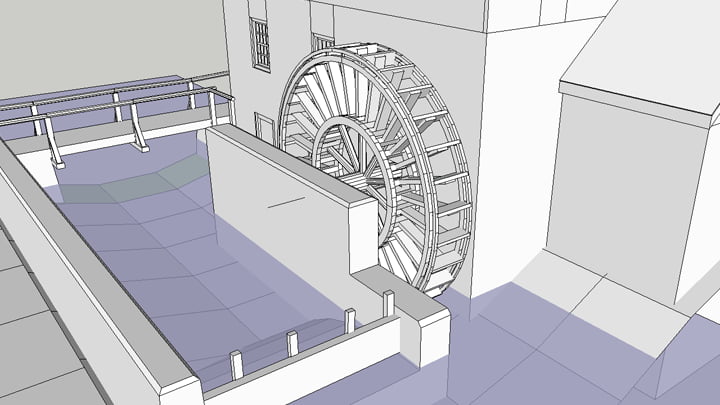 Back to work on the new paper mill, I’ve now finished the textures and made it ready or testing: 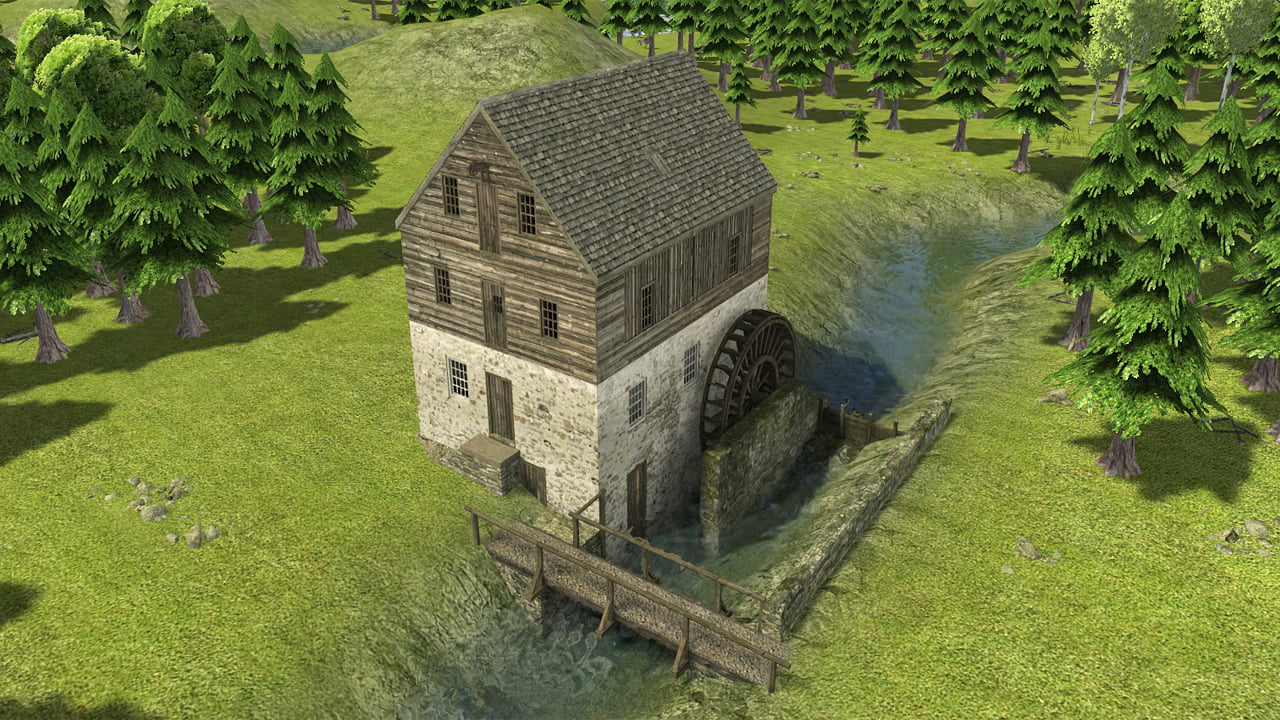 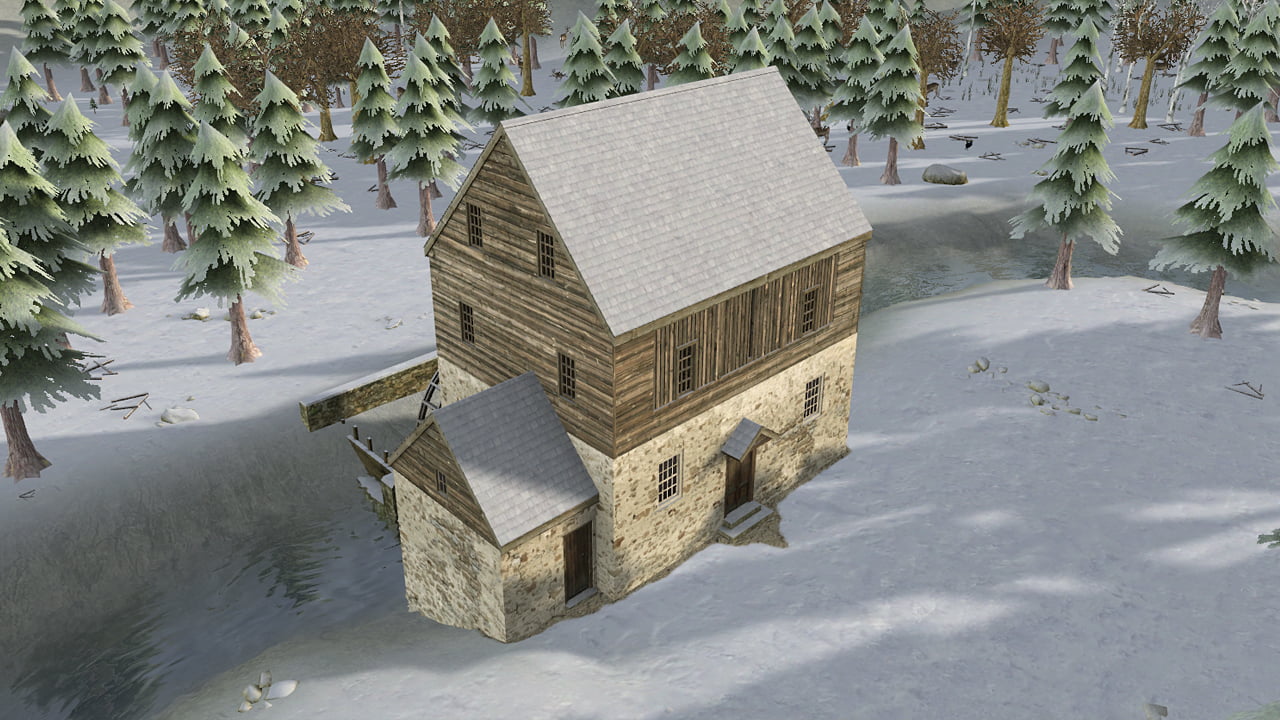 I again thought about production values and will stick for now with the original idea of making paper out of linen. It’s not the most realistic way because they actually made it from outworn linen rags. But that’s not possible without new core game mechanics. Another option would be to produce it out of thin air with linen as building requirement to make sure this material is available in town. Let’s talk about it if you have an idea how paper making should be included in Banished.

Current details about the building and production you can find on wiki page.

The mill comes in two versions for testing. One as it’s intended and working well in the North and other mods with glass and iron fittings. And a vanillized version with simply wood, stone and iron as requirements. The latter also follows the textile limit instead of utensils or crafted goods since this custom flag is not available in the base game. It also has a brighter texture to match vanilla lighting.

Downloads are available from your Early-Access page.

Now I have tested the new mill. It´s beautiful. There´s one thing I find that you should look at, Tom:

I started the mill by using 3 workers. This map isn´t perfect so there´s only room for it in a corner and I only had houses for 3 workers at the beginning. It worked well, the annual production was 242 and 246; or for each worker (educated with 3 stars happiness) about 80 paper each year. A bit less profitable than to produce linen coats but you only need a little of one raw material, so it´s a good, reasonable profit.

Then I built another house and assigned another 2 paperworkers. I was surprised to see, that the total output wasn´t much higher (248) for 5 as for 3 workers.

Next change was to use only 2 workers. That year they produced 160 paper; 80 each. I used the time to build some more houses in the area and finally I assigned 10 workers. They didn´t produce much more than the initial 3, 264 paper.

I opened the personl menus from all paperworkers and I never saw more than 3 working at the same time. The others were picking resources or went idling.

The 10 possible workers make no sense. I don´t know if it´s possible to let more than 3 really work. I have seen the same thing in other mods, I think in DS Industrial mining where you can use many workers in some sites. I don´t remember if he managed to solve the issue.

Oh, my fault. Seems I did not add enough use points for 10 workers. I will fix that. Thank you for this find!

The competition with tailoring is a problem. There is not much reason to actually go for papermaking yet. It is more profitable but it doesn’t really create the wish to build the mill since you also can sell the clothes for no additional building costs. I have an idea how to decouple it. If it works, we can test it then..

But I find it very well competable with clothes making, you only need a small input of linen to get a good profit and unless I have a surplus of leather that I need to get rid of, I would certainly use it if I need trading goods.

The main problem with this mill is rather that it’s not easy to locate. Not every map has a suitable place for it.

I have reserved a place for it in my present game but it need to wait some years to be built.

What an incredible model, well done, love it.:)
The textile way seems the easies yeah, maybe some options for cheaper variants like we talked about but that might make it too complex?
Hand written books would be great and very valuable. By the historic time of this mill print presses were widely used already. Expensive, of course.
There is so much that can be done with paper as a recourse!:P

I’ll fire it up just to see it in game and get a feel for it, but can’t promise any thorough testing at the moment, sadly.

Tested it in-game. It looks SO good.:)
Offering various production options seems like the way to go to me.
I don’t think any other mods outside of The North have Linen production set up, do they?

I’m also happy with the result. Was a nice idea!

Linen should be in CC/MM/RK.. no? There are also small mods that add a flax chain. If that doesn’t really work, I can upload my Weavers Hut as a separate mod.

Oh, you’re right, I’m rusty, sorry!
And yes, it’s wonderful, I really like how you implemented the bridge across the water. Makes it harder to place, but looks amazing!

Right! So we need a printing house or a poor guy who writes it by hand.. =)

a small hut for a writer would be nice, but just for the bible maybe too much?
maybe you can integrate it into any building? maybe a priest at the Wooden Idol could write it on a small stone or something^^

Hey there,
any news on the beautiful mill?:)

Unfortunately not something new to show. Modding is pretty much on pause this summer because of other work. But I want to come back to it and the first thing will be to finish this mill!

Ohwow…love the detailing!:O
What a wonderful thing this will be once in-game.<3

The movable mill miniature on the Rittenhouse site is brilliant.:O
Showcases the work decision from lower and upper floors nicely.

Love the design.
Once paper is an actual recourse, it could potentially be used for so many interesting things.:)
Bibles for churches, school books, news papers for taverns/inns, any kind of administrative notice like needing land deeds for buildings or .
Realistically these would need a form of printing technology/production too, but like flour, it would be a valuable product that people use for many different ends.

Will you introduce paper in Banished? Do you also have ideas about its purpose? (except maybe making the bibles you need to build a chapel). A bit off-topic; I noticed that you don´t need a bible for the Russian chapel, is it on purpose, and what´s the reason? As far as I remember you need a bible also for the normal “vanilla” chapel, that´s also no pagan building.

It will be of course a new mill, not replacing the other, and introducing paper made from linen or flax. It would be for now a profitable trade good. If further developing the chain it would probably lead to a printer profession as you both write. I don’t know if to include this mill into the North at some point or to have it just as add-on for CC and others. Basically it would match the idea of the North 8 “Town Charter” update if I will make this. The construction is interchangeable and was built this way also in Europa, I’m sure.

Yes, the construction materials might vary from place to place, but the design will be mostly the same around this time.:)
It is up to you how to implement it of course, I would personally like to see it as a stand-alone, if for no other reason than to be able to be able to add it to my running game.

As I said earlier: I think having it be a tertiary product, being based of textile, will add justification for it being a valuable trade good. Though the lack of textile rags made people experiment a lot with substitute fibers (most of which were very inferior): asbestos, leather, corn husks, basswood bark, potato vines, beach grass and seaweed. With the most successful substitute being lime and aspen chips or straw with an alkali solution.
By the end of the 18th century bleaching techniques to make dirty or inferior rags more suitable to white(ish) paper were being applied.
Different resources for different qualities/price of paper could be fun but maybe more hassle than you want to put into this.