The Beta test of North 7 is running and besides bug fixing, we found some gaps in gameplay that want to be filled with a new building. This problem occured because in version 6, the medieval log style was early game without any special requirements. Not consistent with houses obviously having windows but necessary to make them available right at the beginning. With introducing a more ancient style, those log cabins moved to mid game and got their actual materials. For housing and most production chains it works already but not for all and one of them is herbalism. In our test version, people can collect herbs manually but they are unable to consume them until glass is achieved by trade and that doesn’t make sense.

So what the banished Vikings need is something to use herbs and it should not only look more primitive than a Herbalist Cabin but also work this way. Vrayna’s idea of reducing its function to a place where they consume but don’t gather herbs sounds good. It follows the principle of micromanaged early game items and more efficient or comfortable workplaces later. Other options to keep the existing herbalist worth to build is reducing radius and storage capacity.

But first, I have to make a model that matches both turfhouses and framehouses but is also easy recognizable. Looking around for some inspiration, I found these nice artworks made by Peter Haragos (haragos.com) Similar constructions can also be found in open air museums such as Fotevikens, so it’s not too much fantasy style. 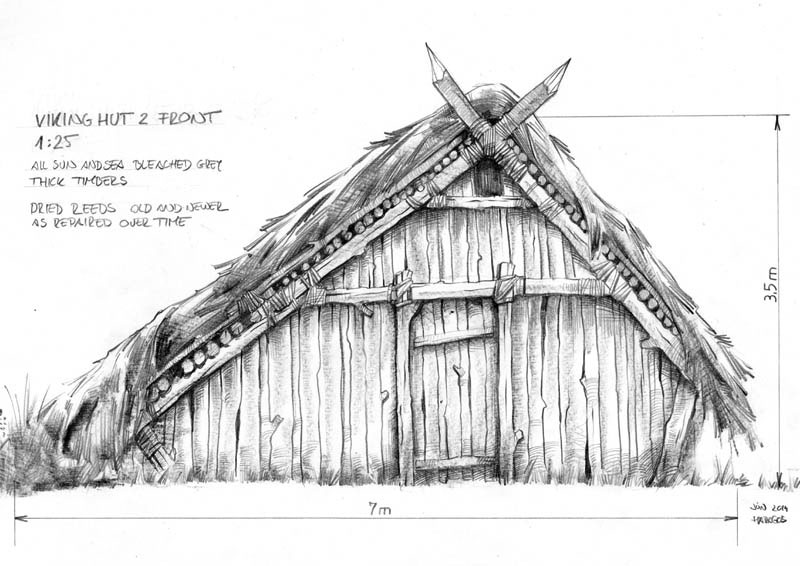 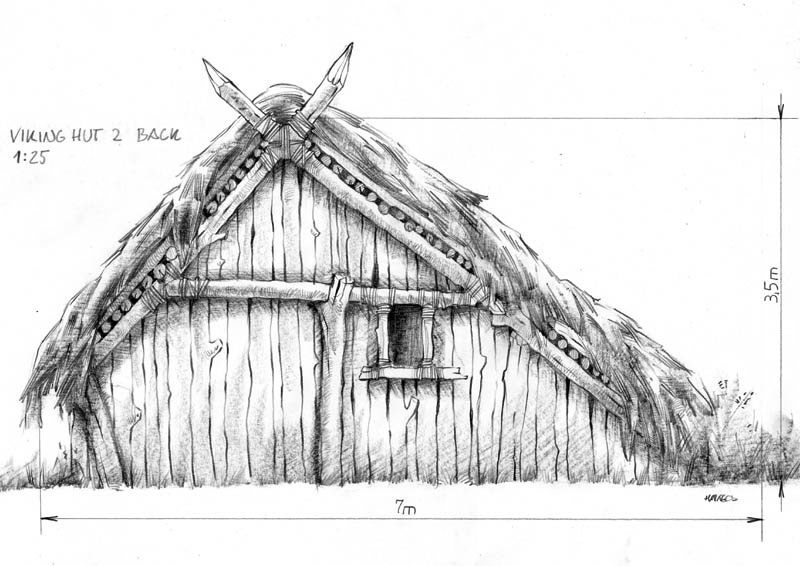 This I want to turn into a 3d Model for Banished, of course tailored to the game and its grid based maps, also low-poly and optimized for good performance. Stop by again to see how it is built!

Back to it now in SketchUp and the first thing I always do for a new building is making a plan of how it is placed on game tiles and where people will walk or drop resources. This one obviously goes on 4 x 3 tiles and since people will enter it for their healing session or whatever they will perform in this hut, it needs an additional tile in depth to make sure they don’t run through walls. That would be a bit too much of magic.

Trying a first sketch in game I wanted it lower to get a more ancient look but since people can’t duck their head, I dig it a bit into the ground, just like old pit houses were made. I have put more geometry into beams and things to get the rustic style of the artwork but most of this effect will have to come via textures. And last but not least a bench to let people sit down when such a session takes longer than expected. Could also be a herb basket or maybe some more fancy detail. Let me know if you have suggestions how to make this model nicer for Banished. 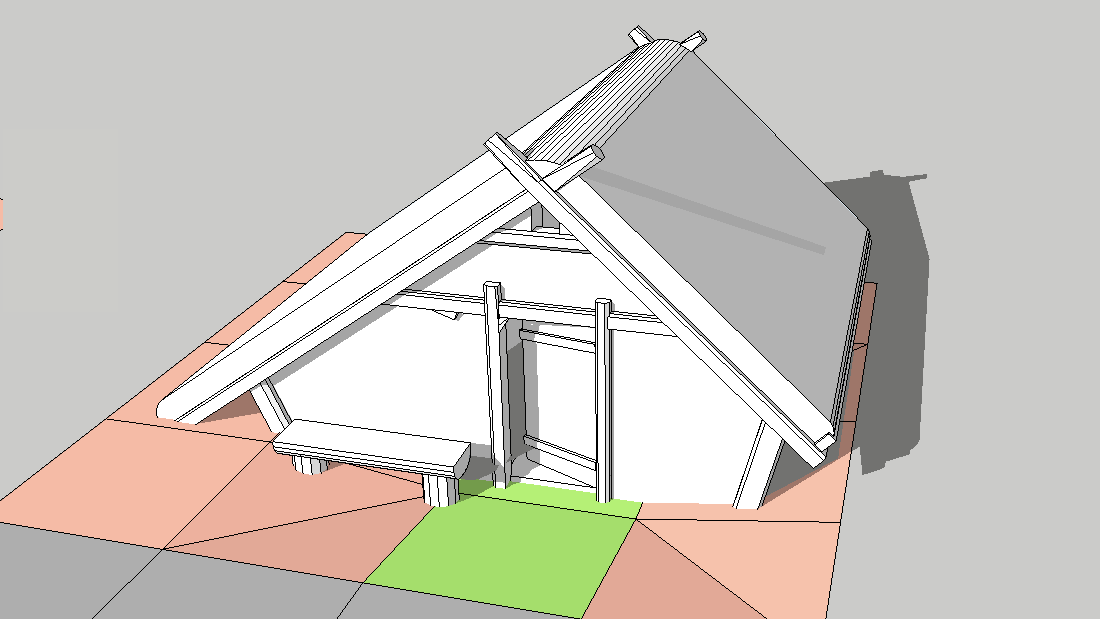 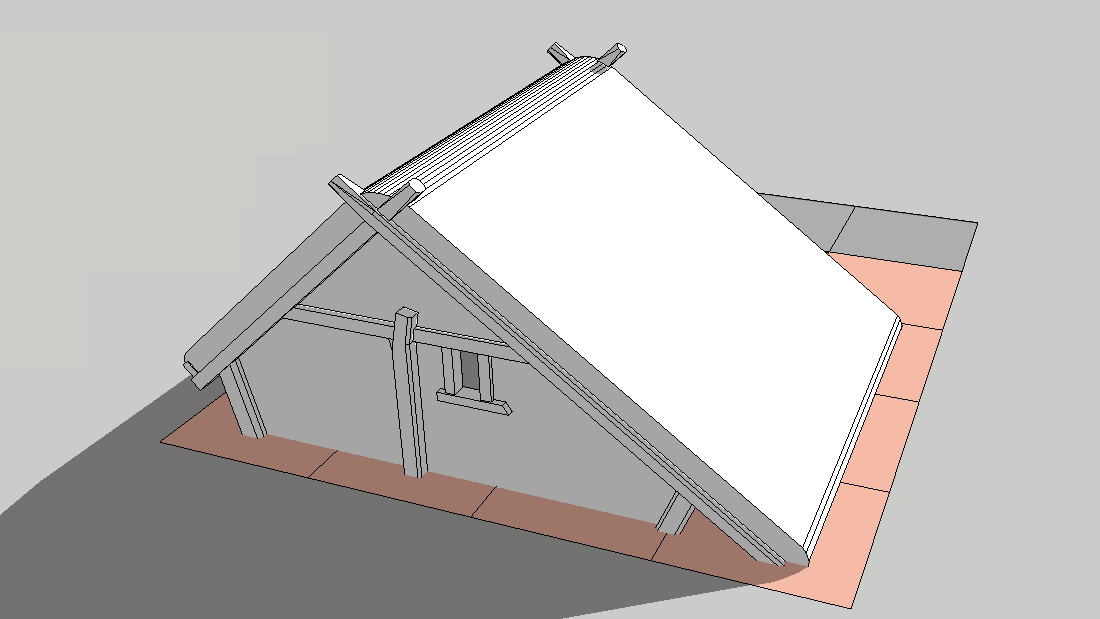 Next job will be to prepare some building stages and then to send it to Blender department..

Today all the labor intensive but not so exciting steps were done, from baking AO and arranging UV maps until adding use points and things in Blender to make it working in the Banished universe. The texture I created in Photoshop trying a rustic look as possible and with a grass roof instead of thatch in this variant. Maybe to also let some herbs growing along the deep roof or in front of it but this can happen later. For now and for testing, that’s our small and unimposing but very useful Healer’s Hut.. 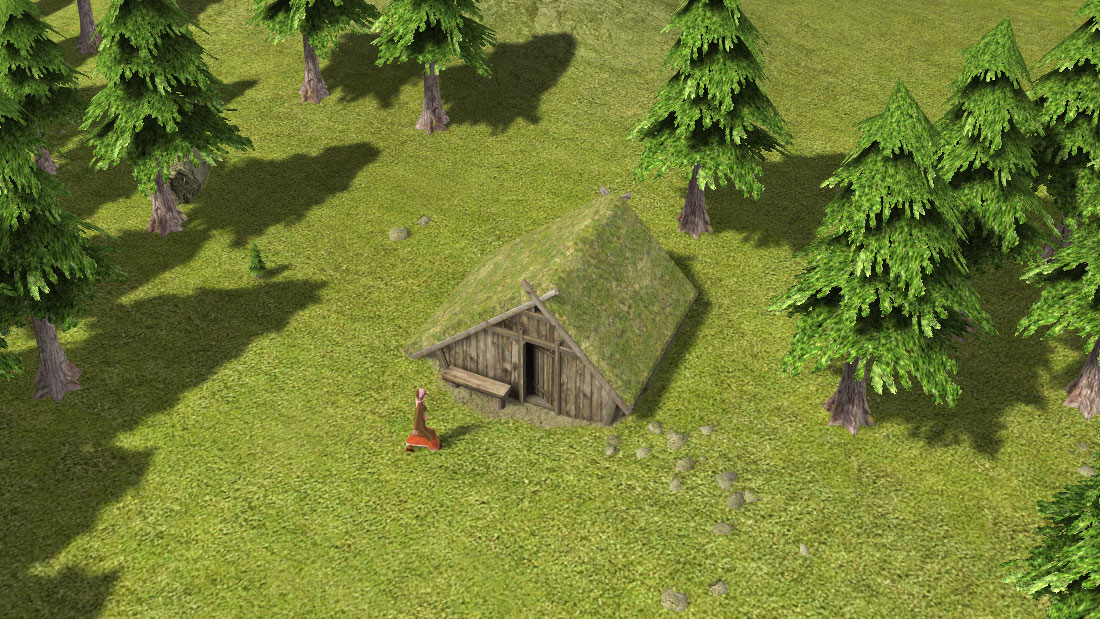 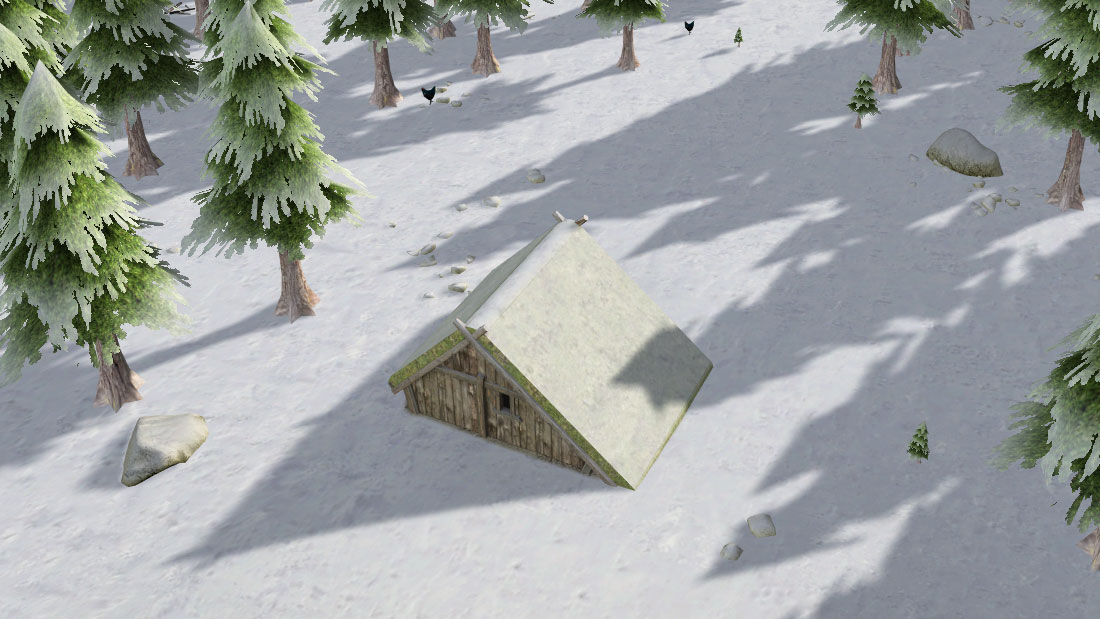 That one looks great. What about adding some “Future phantasie”; primitive housing in this style? That would be unimposing but beautiful, especially in the forest.

Yes, those huts would be also nice early homes for small families. I make a note. Have too many future fantasies already =)