Since the Hunting Cabin is a midgame item requiring glass and not everyone likes to micromanage so much, the idea of a simple but permanent workplace for hunters came up. It should be available right from the beginning and cheap to build but with some drawback to take place between Hunting Spot and the proper Cabin that then adds a larger radius plus storage for hides and stuff.

Thinking what we would build out in the forest (after snaring the guy from last picture) I made this little concept. In front a separate campfire where to roast the meat and behind two small shelters on 5 x 3 game tiles, simply put together from a few logs. We would probably finish the roof with branches and cover it with bark or moss. A door or such would be already too much effort I think and true hunters are not afraid of big animals. But maybe some antlers or equipment around will be nice.

Time for some modding and to improve my concept of a hunting camp that goes nicely with the campfire. I adjusted the fire in North 7 to let it overlap with the new camp. Now it looks better and the game will tell you how to place it by green tiles. I think there should be at least a small storage for meat and hides in this camp. Hunters would then carry it right there and it will be available for roasting or making capes without an additional storage shed. I set it up to 2 hunters by default, so a single hunter will switch between fire to prepare the prey and back to hunting just by turning on/off the camp.. efficient gameplay for banished hunting experts! The concept seems matured, so now to do some Blender work.

The hunting camp is finished, now properly build of real logs, bark and moss instead of white faces. Here are some views from summer and winter.. 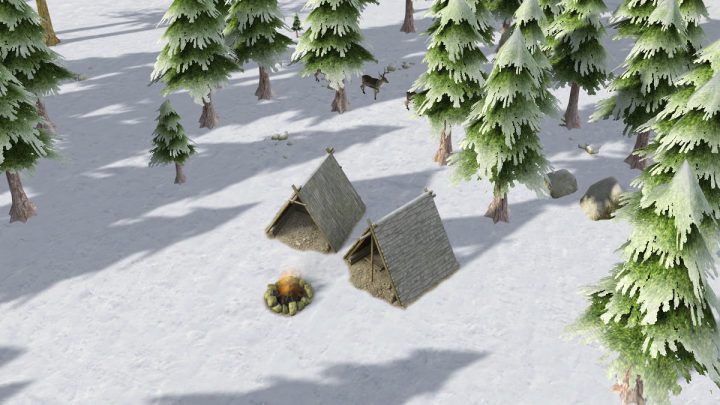 A beta version is now available for early access. In this version, the camp has a storage capacity of 500 for meat and hides. So hunters can carry their prey right to the camp without any additional storage building. At the fire, which is now available to the left of the camp in food production toolbar, hunters roast venison and make hide capes as usual but can now also render animal fat into tallow. To make it not too simple, they need some pottery for this production step. While testing, I reduced the radius to 24 tiles and removed the time limitation. That makes it more similar to the hunting spot and different to the cabin. All details you can find on wiki page. The camp will be included in North 7.1.

@Tom Sawyer.I can’t log in to this site -Paypal.me/BanishedVentures – I keep getting the wrong password – what am I doing wrong? maybe someone will help me? would like to have this mod HuntingCamp.zip (2.1 MB) – Beta version – I like all your mods – they are great. Regards

Hey Taniu, the hunting camp will be released soon with North 7.1 and also as a standalone version that is compatible to all others.

In the top right corner is a heart, if you press it you can support Tom via PayPal. This gives you earlier access to the buildings.

Very nice. Can´t try it out at my present game, because we´re on Iceland.

Same Nilla!
I almost built it anyway to hunt the birds, but it didn’t feel worth the manpower/wood use on the Seafarer start. It’ll get used on my next town though.

This looks really good, will the campfire be usable like the other one?

It’s meant to be the existing one. I’ve just put it there to see how it will fit together. To combine these items will also make sense because it gives an idling point in center of the hunting ground or to switch jobs between snaring and preparing. =)

Oh, I like it so far, works real well with the campfire there, it’s thematic.