Let’s Build a Storehouse .. out of Turf

Settling in overseas, your Vikings can build some clever houses from turf to save wood but not even a simple storage building? That should be changed in the next version! Also, placing a clay pit at the beginning (for pit houses as first storage) feels wrong in this scenario. I even doubt there is much clay in the ground on Iceland.

Not much to say about modelmaking in this case. It’s similar to the turfhouses, just smaller and simplier, not very pretty but pretty useful. For now I made it in 2 variants and will add one or two more different styles. The building could also be used as a small dwelling or as workshop but a storehouse is more necessary I think. 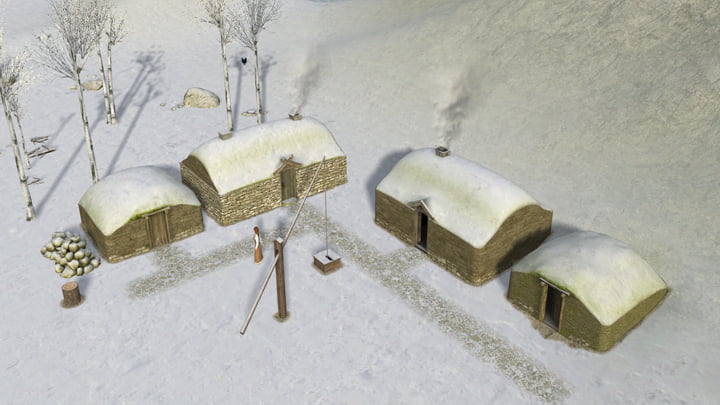 Balancing is a bit tricky because with turf as imaginary resource it’s very cheap but should not be superior over all the other small storage buildings. In first test version, it has a rather small storage capacity of 1,200 on 3 x 4 tiles. That’s a poor area efficiency and whenever you can spare the wood, it’s worth building a proper storehouse. At least that’s the idea and I will adjust it after testing. Properties so far:

It’s now in early access page if you want to play around with some more turf. :)

I find that you both have a point about capacity related to the building cost. That at least the smaller stores should be built more from a design point of view than from “economy”. But Tom, if you intend to keep the heavier food, I find all stores ought to have a higher capacity. Now, you need so many stores when you farm especially vegetables. If you mean that it will be too easy; rather increase the building cost.

But the stores look perfect!

I have another suggestion. People have always stored food in cellars. Why not add a food cellar with a small cost of building materials but a long working time.

Such a cellar would be indeed nice and was suggested recently in this thread.

I would also prefer to slightly increase the storage capacity of the Storehouse, because it is a nice building. In the overview of Storage and Trade in the Wiki, the Storehouse is listed with a capacity of 2200, which would be a good amount I think.

There were still old values in wiki overview.. Now it’s correct. For next update, I will have a look at all storage caps.

Huh, I always expected the turf storehouse to be attached to the turf house, kind of like log cabin workshops now.

It’s cute though, will be fun to play with it.

Moin Tom, it’s me again.^^
I have now tried out the new Turf Storehouses for a few hours. I have therefore started a new settlement as villager. I like the new buildings very much and it fits in perfectly. But like you said, the balancing is not that easy. Since not many materials are needed for the new storehouses and the capacity is quite high there is almost no reason to build the Log Shed or Pit House anymore…
I did some calculations and thought about it for a long time and this would be a suggestion from me.

Log Shed:
I would slightly increase the capacity here to 500. That would make the building a little more attractive. (Because I like this building a lot, but 400 will fill up very quickly).

Pit House:
Since the new Turf Storehouse doesn’t need many materials and has a higher capacity, it doesn’t really make sense to build the Pit House anymore. This is a pity because it is a very beautiful building. So I would only use the Pit House as a food storage, the clay would be used to seal it against insects and rats. So it would make sense to build it again.
Here I would increase the amount of wood needed from 4 to 6 because it is very cheap otherwise. The capacity would then be completely ok. Or you could even make it only 700 for food. Then your new storehouse on staves (which you might want to make) could be a bigger variant to store food, maybe with a capacity around 1400 or 1600.

Turf Storehouse:
Here I would leave the capacity as it is or even reduce it to 1000 so the gap to the log shed would be smaller.
I would increase the amount of stones from 6 to 8 or 10 so it fits more to the capacity and you have to build the log shed in the beginning.

Storehouse:
Here I would increase the capacity slightly, maybe to 2000 because the distance to the Stabbur is huge and so that the player is looking forward to building the Storehouse later in the game.

You could then categorize the storage buildings in the menu as Normal Storage, Food Storage and Material Storage. And expand them as you wish. Maybe in the future make a material storage for the early game or whatever.

Perhaps you can Test it out yourself to see if you like it that way.

That’s how I would do it. Sorry for the long comment again. I hope I could help you.

These are all good ideas. Looking at storage per tile and per building material it’s indeed so that the log shed is almost displaced by the turf one. Basically, all storage capacities are measured at models but generalized and of course with space for balancing changes. I think I will increase the cap of the log shed to 500 as you write and also make it a bit cheaper, so it will be still the first option if you need small storage fast and cheap while the turf storehouse should be the choice only if wood is rare.

The pit house I want to keep as basic storage as far as it’s the only matching one for frame houses but a bit more wood as material is reasonable.

To make sub toolbars was already an idea in version 7 but not enough items yet, that will come at some point. I thought of putting them together with their house style but grouped in food, general and so on sounds good too.